2017 is almost here and there’s a brand new auto show schedule to sink your teeth into. As a premier sponsor of the North American International Auto Show (NAIAS) for the third consecutive year, this is one of our favorite times of the year. We can’t wait to get on the show floor and see what’s new! Here are the top 6 vehicles we can’t wait to see:

No release date has been set, but Jeep has been working hard for the past few years to redesign the Wrangler. According to Car and Driver, we can expect the new edition to have “…a hydroformed steel ladder frame carrying a body made of high-strength steel.” Rumor has it FCA won’t announce the next-gen Wrangler until fall 2017, but in the meantime you can check out this preview of the four-door pickup, which will join the traditional Wrangler lineup.

Automotive News recently captured some spy photos of a camouflaged Chevy test vehicle, which looks to be the new Chevrolet Blazer. The Blazer name hasn’t been used since 2005 and this current version seems to be a cross between the Acadia, Equinox and Traverse.

This is pure speculation, but we have our fingers crossed for Nissan to redesign its mid-sized pickup, the Frontier, for 2018. Look for it along with the Toyota Tacoma and Chevy Colorado when it’s finally announced.

So far all we know is FCA discontinued production on the Chrysler 200 to make way for the Ram 1500 at its Sterling Heights, Michigan assembly plant. PickupTrucks.com spied this camouflaged version of what could be the new model.

General Motors confirmed they will debut the all-new Chevrolet Traverse on Jan. 9th at NAIAS. According to Chevrolet, the 2018 Traverse will feature “a bold and refined design with seating for up to eight passengers.” All we’ve seen is this shadowy teaser image, but we will be front row center in Detroit for the reveal!

Honda recently announced the unveiling of its fifth-generation Odyssey minivan at NAIAS on January 9th. Honda has completely redesigned the vehicle including the addition of “a new suite of innovative features…” We can’t wait to see what Honda has come up with. So far this teaser image is looking mighty sleek. 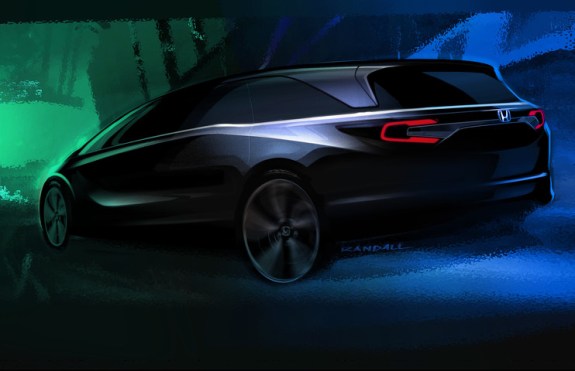 Are you headed to NAIAS or will you watch the debuts from afar? Tell us what vehicles you’re looking forward in 2017!